My husband TJ and I knew we wanted a family from the very beginning. Our story seemed fairly cliche at first. You know, small town boy meets small town girl...they had lived in close proximity to one another most their lives, but like all great love stories, timing was everything. Both had been through some tough times in their personal lives, just as they were reaching the pivotal ages to be graduating and starting careers and moving away from home. He worked in agriculture and then became a firefighter, she a hairstylist. They met, became fast friends whom each needed at the time...and unexpectedly fell in love. Usually we all know the rest of the story right? They got married in 2012, enjoyed a couple years of wedded bliss, have a pretty piece of land, a couple dogs, a couple horses...and then had a couple of adorable children and lived happily ever after with their picturesque family...

Except in 2015 after trying for a year the "good 'ol fashioned way," I realized that something wasn't right. I ended up having surgery, and being diagnosed with endometriosis, and a fallopian tube that was scarred and not functional. We were referred to a fertility clinic where we began treatments. We went through medication assisted cycles, then moved up to IUI, and after zero success, finally onto IVF. Our first round of IVF was actually successful...at first. Unfortunately it ended around 5 weeks in a complicated and scary miscarriage. I spent my 28th birthday that year in the ER very sick and trying to figure out what for sure was happening. Our next round didn't work at all and we got that news just a couple of days before our 5th wedding anniversary. Then we opted to do a biopsy with the third round. The biopsy gave enough new information to our specialists that our fourth and final round ended up finally being successful...for real this time.

When we went in for our fourth IVF transfer, we did not expect it to be our last round. We had four embryos left, and we had intended to only transfer one embryo. Previously, all embryos we had transferred had been excellently rated, and we had hoped for the same with our remaining four. But the morning of our transfer, they gave us the report: One embryo had already failed, one was well on its way to being considered failed, and the other two had seriously deteriorated. The doctor advised us that because of our belief about life, that if we wanted to give any of the remaining three embryos any chance at all, then we needed to transfer all three that day, and that our chances of having a multiples pregnancy at that point was very low; as we were also highly concerned about the risks involved with transferring that many embryos at once. We were both in shock but decided to have faith and take our doctors advice. However, we also tried to prepare ourselves for a negative outcome, and recognized also that we were neither financially nor emotionally willing to start another process of IVF should this final round not work. When we got the call 10 days later that I was in fact pregnant, we were hesitantly thrilled. We had after all, made it that far once before. Thankfully we made it to our 6 week ultrasound with our specialist, where we were so surprised to learn that not only did things look great, but, there were TWO! Twins! For embryos that weren't rated well, they were strong, healthy, growing little babies who incredibly beat the odds.

My pregnancy was surprisingly uncomplicated. My doctors were always pleasantly amazed at my appointments and we were all just completely happy and thankful that for once, my body seemed to be doing what it was supposed to, and that for once, medically, I was being considered, "normal." But then, my water suddenly broke one day shy of 32 weeks. I was admitted to the hospital where they did everything they could, but on February 8th, 2019, our sweet babies were delivered at 32 weeks plus 1 day. But even so, the doctors and nurses kept telling us that for "32 weekers," they were strong and beautiful, continuing to amaze us and beat the odds. So far, our Ryder Timothy and Paisley Ann, have been in the NICU for 27 days. They have had their own personal ups and downs, and thrown me into many anxious nights of little sleep and many tears worrying over them. But they have also excelled at meeting many of their milestones. I never thought I would be such a worried parent. But the journey we have had to bring our precious son and daughter into this world, has irreversibly made me so. Ryder likes to de-stat for seemingly no reason, and Paisley struggles most with eating well. While we are so anxious and excited to finally bring them home, we are also anxious and nervous to be home without the monitors and the close eye and expertise of our awesome NICU nurses; relying solely on our own nervous watch to catch anything that may go awry. We are trying to keep our faith and trust that they will continue to show amazing strength, and that they will end up being nothing short of happy, healthy, NORMAL babies once they finally get discharged from the hospital. Only time will tell. But make no mistake, we are head over heels in love with our miracle snowflake babies, as we affectionately have called them, and we thank God every day for them, and for every moment we have been given together. 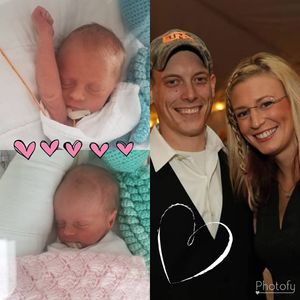 Thank you for taking the time to read our story, and for everything you do to help families feel safer, more comfortable, and better equipped to care for their preemies and NICU babies!