Our daughter Silvana Quinn (Silvie) was born with the umbilical cord wrapped around her neck combined with meconium in her lungs (meconium aspiration).  Her lungs appeared to be filled with tar.  This combination lead to severe PPHN - Persistant Pulmonary Hypertension of the Newborn; a life-threatening illness.  Silvie was rushed to our hospital's NICU - Neonatal Intensive Care Unit.  We did not see her for eight hours, when we were permitted to see her we were told that our hospital's Level 2 NICU did not have the means to care for her and she was being transported out of our hospital to a Level 3 NICU a city away, with a 10% chance of survival.

Silvie was taken to was Salah Foundation Children's Hospital at Broward Health in Ft. Lauderdale, Florida.  This Level 3 NICU had a team of nurses, doctors and therapists that worked on Silvie day and night.  There were countless sleepless nights where we held our breath until the morning.  Intubation, paralysis, oscillator, ventilator, extubation, c-pap, respiratory therapy, nasal cannula, feeding tubes, steroids, sedation, pain management, withdrawals, learning to feed, Galactosemia results, MRIs, EEGs, Thrush and the list goes on and on...
I made a promise, "If Silvie survives, I will pay it forward".  Throughout December and January Silvie fought to survive and was finally discharged January 31, 2016.  The staff was amazing, the nurses were her second mothers and the doctors were miracle workers.

September of 2016, I saw that it was NICU Awareness Month and I remembered my promise to give back.  I thought about the holidays being just around the corner and I remembered how horrible it was having our Silvie in the NICU throughout December and January.  That is when it hit me, my “give back” would be to parents with babies in the NICU during the holidays.  I would give the parents in our NICU the things that helped us along our journey.

I started a GoFundMe campaign and before long my fundraiser took off.  A month later my project was growing quickly, I needed a name and that is when Silvie Bells nonprofit was born.  “Silvie Bells, Ringing In Holiday Cheer To NICU Families”.

Over the course of three months we raised funds and received product donations.  On December 18th, 2016 Silvie Bells gave away 50 Silvie Bells Giftbags to mothers and fathers at Salah Children's Hospital.  We shared tears, stories, hugs and a lot of love.  My heart changed forever.  I knew that Silvie Bells was my calling and that I wanted to make Silvie Bells an annual event and a national event.  With your help I hope to grow Silvie Bells into the “Toys for Tots” of the NICU world. 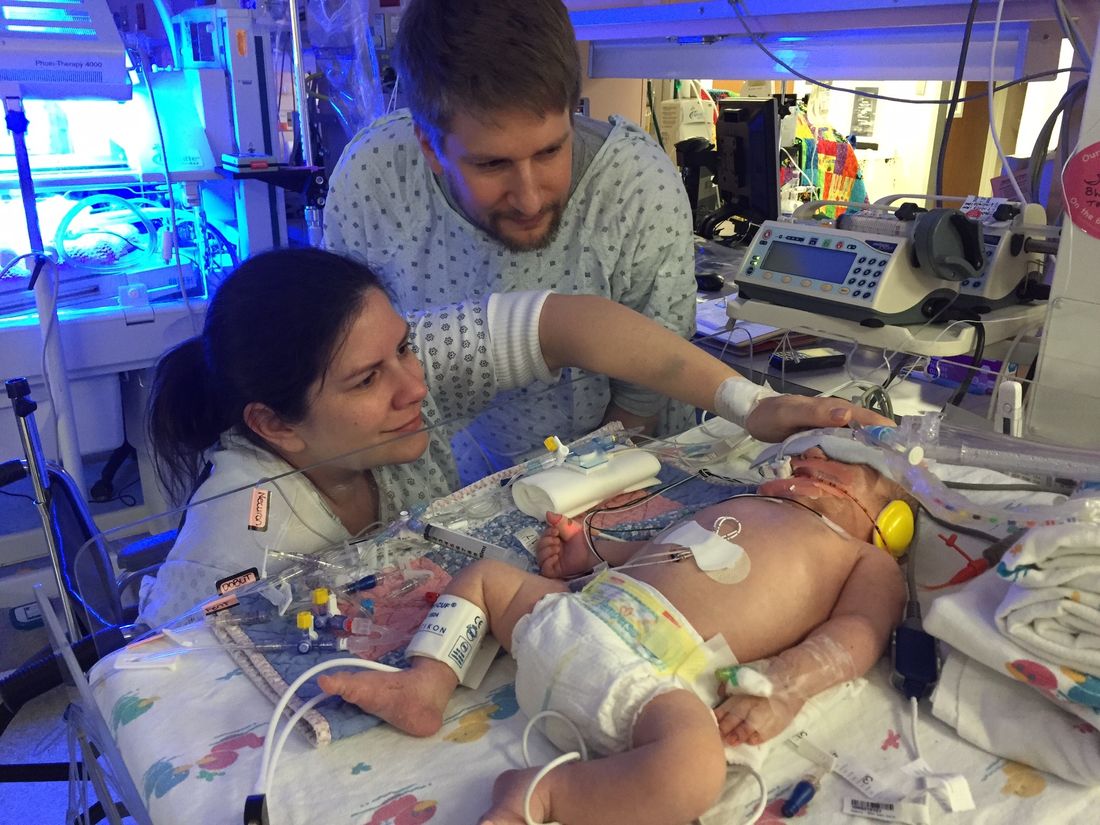 • Owlet home pulse-oxygen monitor: This monitor tracks baby's oxygen and pulse, it's a lifesaver at home after relying on NICU monitors.
• Wubbanub: This pacifier with a little stuffed animal on it, make is so much easier for baby to hold. It taught our daughter to bring her arms in “midline” after being splayed-out for so long.
• WaterWipes: The only chemical free baby wipe out there and then only one that stopped our Silvie's diaper rash.
• The Little Engine That Could Book: We read this book each day, it helped all of us remember "I think I can, I think I can..."
• Reusable water bottles: Pumping and breastfeeding mom’s MUST stay hydrated to produce milk.
• Starbucks gift cards: The hospital has a location on the ground floor, if it wasn’t for caffeine we never would have been able to stay up with her as long as we did.
• Subway gift cards: The hospital as a Subway on the ground floor where we ate most of our meals.
• Notebook and Pen: It’s impossible to remember the countless drugs, doses, feed schedules, doctors and nurses names, daily accomplishments and losses; a notebook was key to keeping track of baby’s first months.
• Snacks: It’s hard to remember to eat while you’re sitting next to your baby’s crib for 12 hours. Kind Bars really got us through!

Thank you for reading our story.  Your donation will help the families and babies in the NICU this coming holiday season.  We thank you for your kindness and generosity.