Having Preemie Twins Changed Me Forever, And For The Better.

My journey to parenthood was a long one. After 3.5 years of unexplained infertility, countless
interventions, and a failed round of IVF, I was pregnant. Not only was I expecting one baby, but it
was twins. I was overjoyed and terrified. I had been dreaming of that moment for so long, and yet it
was hard to relax and enjoy a high-risk pregnancy. The majority of my pregnancy was uneventful
until around 27 weeks. At a routine appointment, signs of pre-term labor were noticed and I was
sent across the street to the hospital for an IV and monitoring. Several hours later, I settled into my
hospital room for indefinite bed rest. I was woefully unprepared, with nary a magazine to read or
even a pair of socks. Over the next seven days of hospital bed rest, we did everything possible to
stop the babies from coming, while also preparing for the very real possibility that it might not
work. On the eighth day, I had finally convinced the doctors that I would continue strict bed rest for
the remainder of my pregnancy, at home. One final fetal monitoring stood between me and my own
bed. And then, one twin’s heart rate dropped. It continued to do so over the next six hours. I
wasn’t going home, and in fact, an emergency c-section was necessary. Several doctors crowded
into my hospital room and tried to explain the risks and potential outcomes of delivering at 28
weeks.

Our next stop was the NICU. Our passage through the NICU was not without moments of bliss and
despair. I developed an all day, everyday NICU routine that would become my normal. We dealt
with many of the common health problems associated with prematurity; jaundice, apnea, PDA, and
infections. But after about 2 months, both babies were finally ready to come home.
As my twins grew, they loved hearing about their “origin” story and seeing pictures from their
babyhood. From the very beginning, this always included discussions of life in the NICU, explaining
that they were born early and were very small and needed additional time in the hospital to grow. I
thought a book would be a nice supplement to the conversations we were having, so I set out to find
a book about the NICU. I was looking for something that was a simple introduction to the NICU, was
developmentally appropriate for younger toddlers, and reframed the NICU experience from scary
to positive. But I couldn’t find anything I loved, so I decided to write one myself. I wrote the
rhyming text, added the illustrations, found a self-publishing company and sent it to print. My
children enjoyed the book, we read it over and over to the point that they memorized it. I began to
get requests for the book from friends and family. I thought that if this is something that helped my
kids, perhaps others can benefit from it as well.
I decided to start Me Two Books, an organization that uses books as an educational tool to help
children recognize differences in themselves and others and to embrace it. My first book, I Was a
Preemie Just Like You celebrates what young preemies went through, and reminds them that they
are not alone. I know that one of the things that I enjoyed while my kids were in the NICU was
reading to them. It made me feel like a “normal” parent and I could block out all the noise and
imagine that I sitting in my children’s nursery reading to them instead of a hospital. It helped me
forget about the stress, if at least temporarily. I would have loved to be able to read my preemie a
book about being a preemie. So hopefully this book can provide that calming peaceful experience to
help families escape in the pages of the book and enjoy time with their child while in the NICU.

My journey to parenthood has been so much more than I expected. It has changed my life, my
career, and my passion. Having preemie twins changed me forever, and for the better. 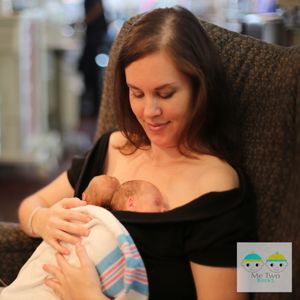 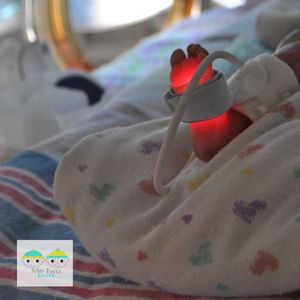 Written By:  Ali Dunn
NICU Parent, Founder of MeTwo Books and Silvie Bells Blog Contributor
Ali is the author of the children’s books, "I Was a Preemie Just Like You" and "One of Two"; A Twin Story, About Individuality".  She is the chief mom officer of identical twins born at 28 weeks. Find more information about Ali and her books visit her online at MeTwoBooks.com, Twitter @me2books and Instagram @me2books.